I remember years ago when a group of feminists staged a protest about El Oso y el Madroño in Puerta del Sol, which they claimed was actually a female bear–una osa.

That day, I looked between its legs and, whaddya know–no bollocks. Of course, here in Europe, sculptors aren’t shy about putting large, dangling genitalia on public monuments, so I assume they’re right. It’s a female bear. Several dozen women turned up to protest, and the Soy Una Osa campaign was the top story for a day, because back then there just wasn’t much else to complain about.

When everything was going well–when Madrid was the next Miami–the socialist government would just let people protest about whatever.

Now, they “Popular” Party (somewhat misleading name, in my experience) is in government, and they’re cracking down. It seems like every day in Sol, on Calle Montera and Gran Via, there are police vans lined up. The helicopters circle the city center, and the riot police stand shoulder to shoulder, making a statement. 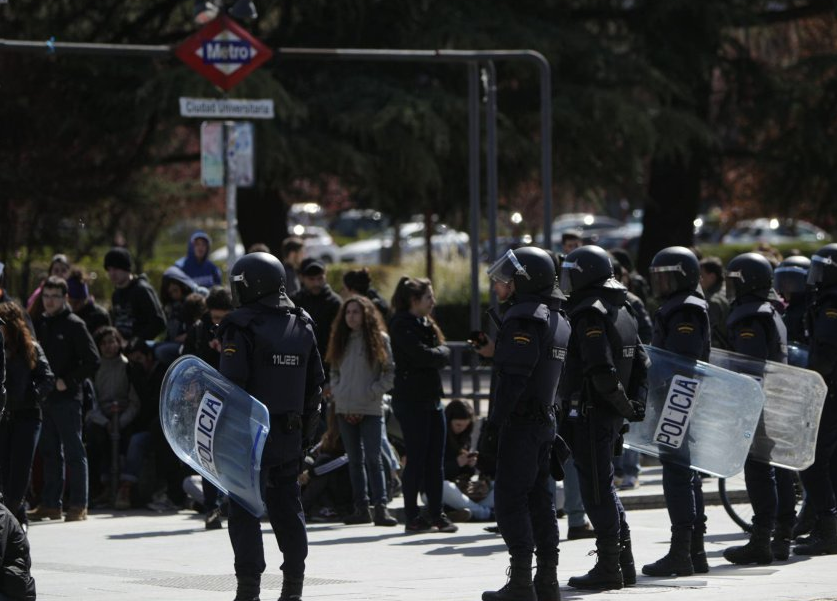 Photo by Alvaro Garcia for El País. I’d take my own photos, but I don’t want to get my skull cracked open by one of these gentlemen.

Some days, they stop and search anybody looking remotely punkish or anti-establishment. Other days, there are beatings and arrests and rubber bullets whizzing through the air.

Welcome to the police state.

Of course, we should put things in perspective. One of the great things about living in Europe is that you don’t have to worry too much about arbitrary state violence. The police in any number of countries out there (Egypt, the Ukraine) are happy to kill protesters. Here in the EU, that sort of thing would look pretty bad for everyone involved.

But, let us also remember that we’re in a country whose dictatorship ended a mere 40 years ago, meaning that a lot of the people in charge still have fond memories of fascism.

It’s an interesting situation, to say the least.

Recently, Ana Bottella (no comment) has proposed closing off the entire center of Madrid to protests. It’s a tricky legal issue, of course, and the ban might not go forward. But I assume her motivation is to keep the tourists from seeing the riots–to keep Marca España associated with fun in the sun, and not with jack-booted goons and repression.

This comes just days after the courts declared the Ley de Seguridad Ciudadana unconstitutional. The law looked like an attempt by the government to eliminate dissent altogether, setting fines of thousands (or tens of thousands) of euros for people caught doing fairly normal protest-related activities.

Especially controversial, the prohibition against taking photos of on-duty police officers. Kind of sounds like a big middle finger to democracy if the state is able to prohibit journalists, for example, from reporting on a conflict between protestors and police.

For a guy like myself, who doesn’t go to protests, the main issue is that I have to walk past potentially violent situations every day when I leave work.

I wrote last year about the riots in Atocha–in that case I was in the middle of the rubber bullets, right in front of Museo Reina Sofía. The last few weeks there have been similar situations all over the city.

Last weekend, the Marcha de la Dignidad, which attracted somewhere between 50,000 and 2 million people (depending on who you ask) ended with violence. This week there are burning barricades at La Complutense University.

So what do you do? You’re a hardworking guy or girl, tired after a long day, and generally apathetic towards politics. You’re on the way to buy a USB stick or something equally unglamorous at FNAC, and suddenly, the riot police charge with clubs swinging, people run every which way, and you have about 2 seconds to decide: do I run and risk being confused with the protestors, or do I stand my ground and risked getting clubbed just for being in the way?

Anyway, now that all the real journalists have moved to Brazil (ha!) somebody has to talk about these things.

Since January, when something as ridiculous as some road works in Burgos was able to escalate into a national conflict, it’s been pretty clear we’re all sitting on a powder keg, and anything–absolutely anything–could set it off.

Reporting from my politically apathetic sofa in Barrio Tetúan,

P.S. Got anything to contribute? Leave me a comment…