Famous Spanish people – all of Spain’s brightest and best

Who are some famous Spanish people?

I’ve been talking about Spain’s attempts to market itself as a country these days, and about the Spanish brand – both here on the web and with some of my real-life friends.

A topic that always comes up is the fact that in the USA, a lot of people probably don’t  know who any real famous Spanish people are.

Definitely a bit foreigny, not like an all-American guy such as (for example) Arnold Schwarzenegger.

(That was sarcasm… get it?)

So who are some famous Spanish people?

What are the Spanish doing for the world these days?

I’m limiting this to living people – another day I’ll do a post about some important people from history, and some people who aren’t famous but probably should be.

It’s kind of a long story.

Penélope Cruz (from Alcobendas, right here in the Comunidad de Madrid), Antonio Banderas (from a town near Málaga, Andalucía) and Javier Bardem (from Las Palmas de Gran Canaria, Canary Islands) are three Spaniards who have made it big in Hollywood.

And if you want some fun with Spanish stereotypes, you should see Jamón Jamón.

The film is like a compendium of every ridiculously Spanish thing you could imagine: an obsession with pork products, bulls and bullfighting, testicles, and general male virility – plus you get to se Penelope Cruz naked!

Cruz and Bardem met during the filming of this movie, a full 15 years before Woody Allen cast them together in Vicky, Christina, Barcelona. 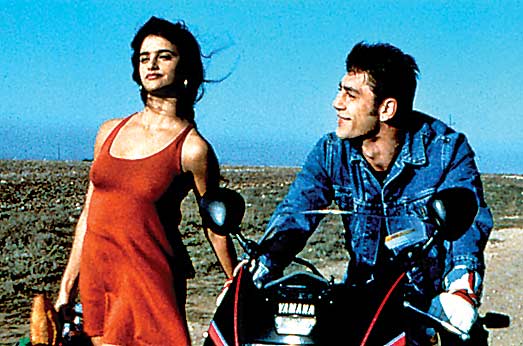 Very young Javier and Penélope in Jamón Jamón. It was Pe’s first film!

Antonio Banderas has been in Hollywood seemingly forever, but he got his start in the 80s in several films directed by Pedro Almodóvar.

As such, he was a big part of the Movida Madrileña, which was apparently a lot of fun if you were around for it – the dictatorship was over and there was a sort of artistic revival, with lots of sex and drugs and wild self-expression.

Unfortunately, a lot of the people involved OD’d and aren’t around anymore. I talked about one Almodóvar / Banderas masterpiece in American Ignorance.

Almodóvar himself is very famous in Spain, but perhaps not a household name in the States. He won an Academy Award and a Golden Globe for Talk to Her, which was actually pretty good. A lot of his more recent films, in my humble opinion, suck.

And a lot of Spaniards don’t like him at all for portraying them as a nation of eccentrics and perverts.

Because most Spanish people want, above all else, to be considered “normal” so they don’t appreciate their most famous film director making them look otherwise.

Get sweaty with some famous Spanish athletes

Fernando Alonso (from Oviedo, Asturias) is apparently pretty good at driving wildly expensive cars around in circles, and Rafa Nadal (from Majorca, Balearic Islands) is great at hitting a little green ball over a net, but in my mind, neither Formula 1 nor tennis really qualify as sports.

That is, of course, only my opinion, and apparently, a lot of other people disagree and are willing to pay both men millions of dollars annually to practice their so-called sports.

Not to mention spend hours on end watching them do so, which for me would be a kind of torture.

Basketball (a real sport, incidentally) is growing in popularity over here.

The Spanish national team has won a couple of world championships, and sent a few of their very good players to the NBA – specifically Pau Gasol, Marc Gasol and Ricky Rubio (all from Catalonia) and some others.

Serge Ibaka was born in the Congo but moved to Spain as a teenager, he has since received Spanish nationality and now plays for the Olympic team.

And of course, who could forget the Spanish football team? Reigning World Cup champions and winners of two consecutive European Championships! European football clearly is a sport, and not nearly as boring as many people assume.

Some Spaniards suspect that the superlative awesomeness of the national team is actually a conspiracy by the government to take people’s minds off the shittiness of the economy and their own corruption.

An interesting theory, to be sure, but given that the government has just made everything else suck worse, I really don’t see how they could have managed to make the football team so good.

I have a whole article about that in Is the Spanish government hyptnotizing you?

Julio and Enrique Iglesias (both born in Madrid) are, of course, very popular singers. Spanish people don’t get much more famous than this.

Anyway, something you might not know: Enrique has spent most of his life in the US, being sent there after his grandfather was kidnapped by Basque Nationalists in 1981.

I guess it’s a long story and I don’t know much about it, but the whole Iglesias family has been kind of pissed off at Spain since then.

Also from Madrid: the opera singer, composer and orchestra director Plácido Domingo, known as one of The Three Tenors. The other two are, of course Luciano Pavarotti, who died in 2007, and José Carreras (from Barcelona), who, as the Seinfeld episode made clear, nobody can ever remember.

In general, I find it hard to get into Spanish music. I’m not sure there are any local groups you really need to listen to.

But by all means, google around and leave me a comment.

Not much to say about these two.

Rebeca Linares is from San Sebastián up in the Basque Country. And Nacho Vidal is from a town near Barcelona.

They are famous (among some people… ahem!) for certain anatomical features and the acts which they are willing to do on camera.

Funny story about Nacho Vidal – back when I was an amateur boxer, I showed up to the gym for my usual class, only to find the place overrun with a bunch of showbiz types.

It was clear that they were showbiz types because nobody else at my gym would ever show up with such fancy hairstyles and shiny gold Adidas track suits.

Anyway, they were doing a boxing-themed photo shoot. Later on, somebody told me that it was Rolling Stone (well, Spanish Rolling Stone, anyway) doing a piece on Nacho Vidal.

I pretended to know who the hell they were talking about, and googled him when I got home… I guess I had been just centimeters away from his famous member in the locker room, without even knowing it!

I suppose I should also take this opportunity to mention Poli Díaz, el Potro de Vallecas, 8 time European lightweight boxing champion, who used to train at the same gym.

He was involved with some shady people (come to the gym with me sometime and you’ll see why), got hooked on heroin, and ended up making some “adult films” of his own to pay for his addiction. He still hangs around the barrio, now dead-broke and unemployed, like everybody else in that part of town.

Then there are the historical Spaniards: people like Miguel de Cervantes, author of Don Quixote, and Diego Velazquez, painter of royalty.

Like I said, another day I’ll talk about some of the best and brightest from Spain’s history, and a few brilliant (living) businessmen who I think deserve at least a Forbes cover or two… We’ve got Amancio Ortega, founder of Zara, as well as Ana Patricia Botín, president of Banco Santander.

Is there anyone else I’m forgetting? I guess I probably am. Hit me up in the comments if there’s someone you think I’ve left out.

P.S. Ignorance of other countries, of course, goes both ways. Most Spaniards know jack shit about the US apart from what they see in movies. When I tell people I’m from Phoenix, they know about Charles Barkley and the Suns in the early 90s. They then proceed to ask me “Arizona is somewhere in Texas, right?”

P.P.S. I guess there’s more I could say about famous Spanish people after all… Did I mention Elsa Pataky? She’s from around here somewhere. And what about that Picasso guy? He’s pretty well-known.

P.P.P.S. For more fun, check out 4 things I hate about Spain. Or you could try 32 things I love about Spain, if that’s more your style. Or these 5 Spanish stereotypes. Either way, have fun!