It was back in 1952 when a Spanish director Luis García Berlanga filmed his now legendary Bienvenido Mr. Marshall about a small town in central Spain preparing for the arrival of an entourage of American dignitaries as they toured around the country on a goodwill visit.

Though never specifically mentioned, except for in the title, the visit was part of the Marshall Plan, the United States’ economic initiative to refloat ailing European economies from post-war recession.

Eager to gain prosperity but ashamed that their hometown’s lowly and impoverished appearance might otherwise disappoint their guests, the residents, in true Potemkin-village fashion, voted to transform their community into a typical Andalusian town in order to meet the expectations the visitors would have of their country.

There is little Andalusian about Castile, but it didn’t matter. Money and standing were at stake.

I won’t spoil it and tell you how it ends, that’s for you to find out, but Bienvenido Mr. Marshall is a ludicrously comical tale with a very disturbing truth behind it: Spain has a heck of a time trying to sell itself.

Fifty years later, I was on an Iberia flight to Madrid and flipping through the duty-free catalogue with the interest of a stone – because I never look at those things unless I am in the mood for complaining – when I began to notice that every time a Spanish brand was listed, something like “Made in Spain” was printed next to it in an attempt to try and woo the reader into purchasing the item.

Now, that wasn’t going to make me reach for my wallet and shout, “Uh, stewardess, could I have two of these silk scarves? It’s my contribution to the betterment of this economy.”

But it did confirm a growing trend brought to my attention lately that showed that Spain has launched an offensive to make the world more aware of its products.

Renault’s ad for cars made in Spain appeals to patriotism in times of crisis.

It isn’t often that you see such an overt promotion of Spanish merchandise. But these are no ordinary times. With Spain’s economy still floundering in one of the worst recessions in history, and with its reputation trashed by the international media after last year’s threat of a bailout, what little name the country had for itself in terms of reliability, has since become deeply compromised.

It should come as no surprise, then, that a movement should arise to restore that image to a level of respectability, as well as urge people to support the national economy in the hopes of creating more jobs.

Major companies as well, such the jam maker Hero, or the electric appliance manufacturer Balay, have gotten in on the act and are boasting the fact their goods are actually made in Spain.

Campaigns like these can sometimes come across as contrived and ineffective, when not all together counterproductive, since they tend to suggest desperation.

That may be true to an extent, but they also hint at a change of strategy, and even attitude, that departs from a time when the Spanish themselves were often their own worst enemies. Terms like “Made in Spain!” and its sidekick “Typical Spanish” were, and still are, widely used derisively by locals to ridicule their own goods and services, not praise them.

They are synonymous with botched jobs and faulty quality.

It remains the case even now. Just the other day I overheard a radio station advertisement touting some product it claimed was made with the “finest German technology”. I don’t even recall what was being sold; all that I knew was that it wasn’t Spanish, and that was reason enough to buy it.

When not associated with fiesta and siesta, Spain has suffered from little or no reputation at all, which is sometimes worse.

I became very aware of this during my days of discovering the Spanish wine world, where winemakers despaired when trying to compete not only against the old-time greats like France and Italy, but also against the newcomers on the block, like Australia and South Africa. Even relative no-names like Chile suddenly rocketed to stardom in the market, leaving Spain in the dust.

Olive oil was another. Many people know of Spanish olive oil but everyone adores the Italian version. The fact is, however, Spain cultivates around 45% of the world’s olives, and supplies Italy with much of the prime material it needs to market its product as its own. 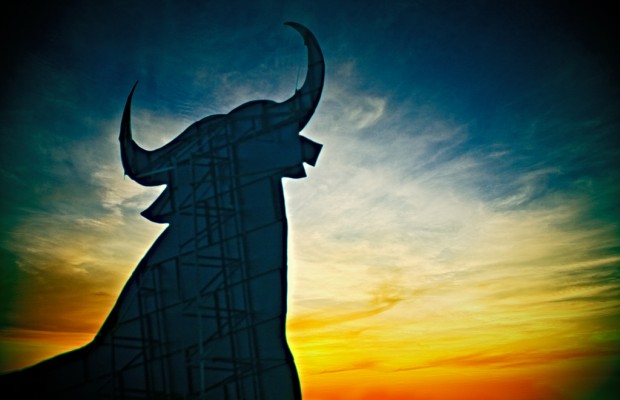 The Osborne bull, symbol of the old Spain. Photo by Tomás Fano on Flickr.

Now, it isn’t entirely fair to hold this country solely responsible for its identity crisis in the world market, but it is important to bear in mind, since getting to the root of the problem will certainly make it easier to solve it in the long run. In this case, if you don’t believe in yourself, who is going to do it for you?

The change in Spain…

Spain seems to be beginning to adopt, albeit gradually, a totally different approach. It doesn’t emphasize bulls and castanets, but people with quality merchandise, the latest technology, solid service and, possibly most important of all, a faith in what they do.

If Spanish sport is indicative of this new attitude, then Nadal’s 13 grand slams or its national soccer team’s string of success both announce that Spain is no longer a land of underachieving also-rans.

On a different front, Spanish cuisine, all but overlooked, has risen to the top of many lists as being some of the finest around. And that’s considering it is up against some stiff competition from abroad. Tapas bars have sprouted all over the world as well.

Even the once much ignored Spanish produce is garnering fame globally.

Spain has a lot of fine products to offer in other sectors too.

Zara has become one of the largest clothes retail chain on the planet, and its business model has been studied by some of the world’s best schools for its uniqueness. For example, the store spends virtually nothing on advertising.

Desigual, the Barcelona-based retailer, is spreading far and wide too.  Spanish leather products, especially its shoes, and recognized beyond the borders for their excellent quality. And that’s just to name a few.

In today’s world, promoting national products is a questionable tactic for a number of reasons. For one, many goods may be manufactured both at home and abroad. Also, it fosters protectionism, when foreign investment is equally important, if not more. The key is to take pride in what this country does well and convince the rest of the world that pouring money into this economy is a sound decision.

Is Berlanga’s vision of Spain a thing of the past? Maybe to a degree, but plenty of remnants linger.

As recently as 2008, Woody Allen, as much as it pains me to confess, proved this point in his film Vicky Cristina Barcelona when he had Javier Bardem take Rebecca Hall to listen to Spanish guitar music in an outdoor garden in Oviedo.

Oviedo, of all places!

I almost turned the DVD off right there and then to throw up.

What might appear to be a nitpicking observation, to me reflects a more serious problem.  Spain, with a culture so diverse it boggles the mind, is still in the minds of the foreigner an Andalusian town.

A flock of flamenco folkloric freaks.

And what’s worse, the good people of Oviedo accepted this gaffe because, after all, a director of Allen’s stature actually came to their city to pick up the Príncipe de Asturias award and promised to shoot there one day.

It isn’t easy to eradicate the malady of stereotypes. It isn’t easy reversing reputations. And it certainly isn’t easy changing old ways. Our impressions, once ingrained in our minds, can be very tough to shake.

But it’s the confidence that the newest generations of Spaniards are conveying, more than a mere “buy me, I’m Spanish” stamp, which will make the difference down the road.