Is the Spanish timetable getting you down? Blame Hitler!

Things are changing here in Spain…

The government is reforming labor laws and the penal code, cracking down on tax cheats (except when those tax cheats are members of government) and, ironically, creating a new anti-corruption law.

But this week, the big news is that they want to put us into a new time zone. Spain is on the Central European time zone, meaning that Madrid is an hour off London despite being basically due south. The Greenwich Meridian passes through Castellón, on the eastern coast, and so being on Central European time means that in winter it’s dark until about 9 AM, and in summer it’s light well past 10 PM.

So the good people in the Popular Party have decided that it’s just a matter of switching the clocks back an hour and then sitting back and waiting for our paychecks to quintuple till we’re all living high on the hog, London-style.

This article in El País is quite enlightening about the topic. It all sounds like a joke, really, but none of it is!

Why are we in this ridiculous time zone to begin with?

The answer, of course, is Hitler.

You see, after the Civil War ended in 1939, Spain was in ruins and the only thing our beloved Generalísimo could do for a foreign policy was to kiss Hitler’s ass.

Hitler (correctly) thought Franco was an obnoxious little weasel of a man, but fascism is fascism, and they couldn’t really be enemies.

Franco, then, adopted the German time zone in order to snuggle up to the big boys in European Fascism.

There was even an attempt by Spanish and German archaeologists to demonstrate that the Spanish people were also a part of the noble Aryan race, but that’s another story.

After the war, Franco neglected to change back to the former time zone, and here we are, more than 70 years later, waking up in the dark. My, how time flies!

Who stands to lose something if we switch to another time zone?

Apparently, the government of the Canary Islands is terrified that if we switch time zones, they’ll lose all the free PR they get by being mentioned every hour on the radio. I don’t know how other people feel about it, but I would certainly never think about the Canary Islands if it weren’t for the radio announcer saying “Son las 4 de la tarde, 3 en Canarias.”

However, other overseas territories seem to be doing reasonably well without the PR. Mallorca, Ibiza and the rest of the Balearic Islands seem to be getting by, and Ceuta and Melilla are hanging on to the north of Africa without any help from the radio announcers. 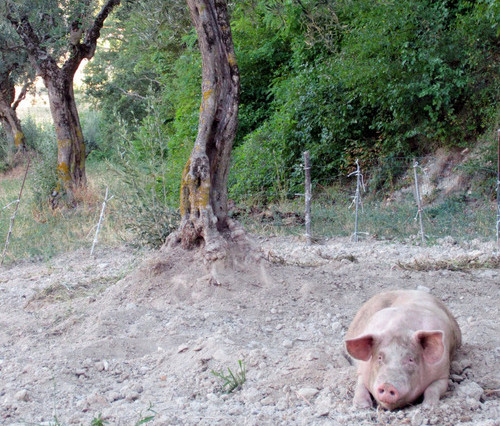 Enjoy your siestas, kiddies. The government might soon take them away from us. Photo by Lucy Moretti.

Why are the Spanish less efficient workers than in other countries?

Well, according to an expert named (seriously) Nuria Chinchilla, the schedule has a lot to do with it. People start work at 9, and usually don’t have lunch until 2 in the afternoon.

This forces people (unless they’re on some sort of paleo diet or doing intermittent fasting) to go to the bar for a second sugar infusion (AKA breakfast) at around 11 AM, in prime working hours.

And at 2 PM they go and have a massive lunch which leaves them in a food coma till around 5, meaning that in order to actually do what they need to do they have to be at work for 10 or 12 hours a day, until 7PM or later.

Is this really the reason for the inefficiency of the Spanish economy?

I have no idea!

But it sounds sort of reasonable. Spanish office workers speak admiringly of those in other European countries whose timetables allow them to get up from their desks at 5 PM and go have a life outside work.

However, many people have told me that Spanish work culture rewards those who put in long hours at their desks, whether or not they are actually working. Apparently, if your boss sees you arriving early and staying late, he’ll think you’re a good worker no matter what you actually do.

I personally don’t know if this is true or not, because I’ve never had one of those “real jobs” people talk about. But a lot of people have told me it is, and I suppose they’d know.

There are still a few things we don’t know about the Spanish schedule. For example:

How the hell do Spanish people survive in a sleep deprived state?

This is something that’s been bothering me for years. Many Spanish people go to bed well after midnight, and they’re up again at 7 or 7:30 to go to work. How do they manage on 5 or 6 hours of sleep a night? I have no idea.

The government is apparently hoping that the TV stations will collaborate by moving prime time TV to an earlier time slot–if watching Spanish TV is something that’s essential to your happiness (God help you) most of the “worthwhile” shows end at 12AM or later.

How will the new Spanish timetable affect English teachers?

This is the most important question of all, because honestly, the work schedule for your average-Joe ESL teacher is enough to kill someone.

Company classes happen before people with “real jobs” start work, at 8 or 8:30 AM. Then you can squeeze something into the lunch break at 2 or 3 PM.

And then you’re waiting till everybody else finishes work before you can do anything. You can easily be out of the house for 12 hours a day or more and only be working a total of 4 or 5. The rest is transport and waiting around. And, of course, you’ll still be broke at the end of the month.

So, perhaps the real reason Spanish people don’t speak good English is because their teachers are dragging themselves around in a state of zombie-like living death all day and hence only appear to be ridiculously incompetent and mentally unstable. Maybe, in the end, this will be good for everybody.

Well, that’s it for today!

Anyway, perhaps my next article will be about the new penal code, which finally makes stealing people’s wallets a crime.

How will it effect the various generations of professional and amateur pickpockets working on Paseo del Prado and in the Metro? Only time will tell!

P.S. Updated! In the end this still hasn’t happened. A couple of years later, it’s still 9 AM before the sun comes up for much of the year. But we have a new no-government, which hopefully will improve something. Once they can decide who’s going to govern… Poor Spain!