At the hamburger restaurant in downtown Vigo there’s a guy eating alone at the next table.

I’m doing my usual thing of talking much louder than most other English speakers (yet somehow much quieter than most Spanish speakers) and he hears me.

As soon as my travelling companion Lucky Lucy gets up to go to the bathroom, he jumps in and asks me where I’m from.

He’s American, with one of those enviable Spanish double nationalities. Here in Galicia with his parents, it’s his first time in Europe. He’s in full-on culture shock mode, and only 19 years old, both of which I find quite amusing.

One of his first remarks is indicative of the steady decline of the American education system. He says, “Arizona, huh? Is Denver in Arizona?”

I guess that state capitals aren’t a big part of whatever they teach these kids in No Child Left Behind.

He explains, “All those square states look the same to me.”

I had never considered myself to be from a square state.

Arizona has one natural border; in fact it’s only a straight line on two sides. Positively eccentric, compared to Colorado or Wyoming.

It turns out he’s from New York, wherever that is. 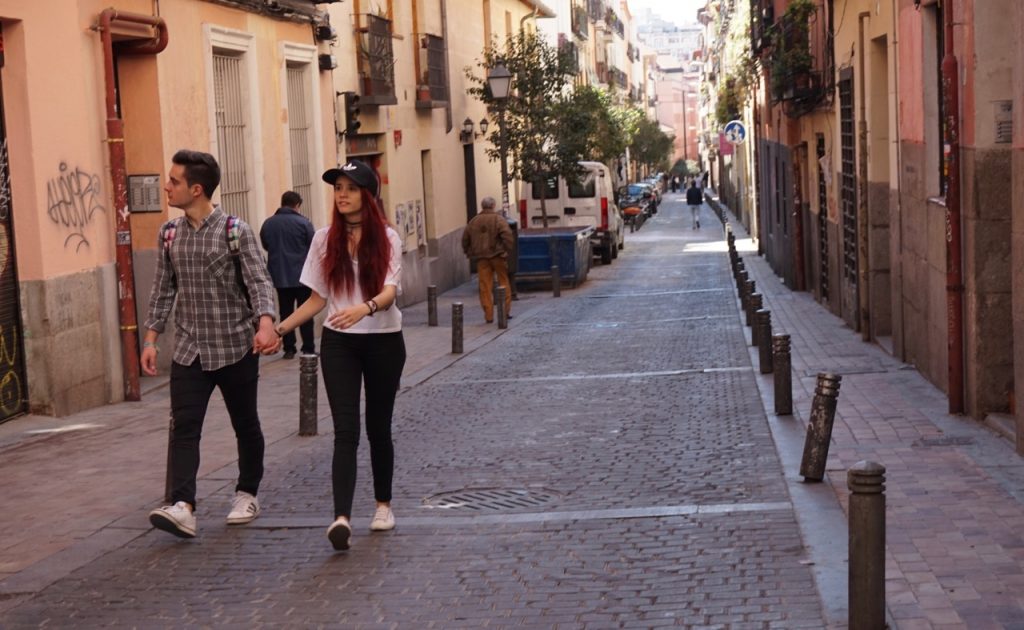 In any case, he just arrived a few weeks ago and is stumped by such questions as:

“Yo, where are all the fat people?”

I explain to him that in Europe, most people know the difference between real food and horribly processed pseudo-food, so obesity isn’t much of a problem.

“I went to McDonald’s the other day and even that was full of thin people!”

Eventually, I notice that he’s drinking mineral water with his hamburger. I ask if there’s any particular reason why he doesn’t order a beer.

What else does he want to do in Europe? It’s all about drinking warm beer and ogling those thin European girls.

He says, “Well, I just got my ID card today and I don’t want them to confiscate it. I mean, in New York (wherever that is) if they suspect you of trying to pass a fake ID they’ll just take it away from you.”

Lucky Lucy (back by this time) finds this uproariously funny. When she was growing up in Italy, the legal drinking age was 7 years old, and even that was flexible.

I encourage him to get a beer. As my father used to say to me, “It’ll put hair on your chest.”

That was back when hairy-chestedness was a desirable trait for men. Back before the word metrosexual was in the parlance.

Another era. A simpler time.

After dinner, I take him to drink his first glass of Albariño. I insist. And I tell him he can call to thank me in a few years, when, inevitably, he ends up in rehab because of the two drinks he had in Spain when he was under 21.

How old do I have to be to start complaining about how young people today are a bunch of wusses compared to young people when I was young? How long before I become one of those curmudgeonly old guys who grumbles about how younger generations are ruining everything?

None of that is actually true, of course. Young people are young people.

I was a tremendous wuss when I was 19.

I was also wildly ignorant of everything that was happening outside my own neighborhood. I barely even knew that Spain existed.

If you had pop-quizzed me on the US state capitals I would have missed quite a few: Vermont, New Hampshire, North Dakota, South Dakota, New York (wherever that is) – who really cares?

Of course, you have to go through the ignorance of youth to reach the wisdom of old age.

Afterwards, you can start idealizing your youth and deluding yourself into thinking you weren’t, in fact, totally full of shit.

I suppose that the moment you realize you’re out of touch with the teenagers is another rite of passage. Like your first glass of Albariño, it’s something that changes your life forever.

Pearl Jam came on the stereo at the bar. Just as a test, I asked him if he knew the song.

“Have you heard of Pearl Jam?” I asked him. “Eddie Vedder? Spokesman for all depressed, greasy Gen-Xers with bad attitudes?”

I might as well have name-checking one of those crooners my dad used to talk about, Bing Crosby or Dean Martin or some such.

“This is your bedtime?”

“Yeah. You know. Once you hit a certain age, you’re awake at 7 o’clock no matter what.”

That’s another thing my dad used to say.