Full of young girls showing a lot of leg on the way to the beach and metalhead guys with greasy hair and bored expressions, northbound.

Only one problem so far: it appears that the we will be going cross-country facing backwards.

Oh well… It could be much worse.

Welcome to the Train Macabre

Last week a train on this line took a curve at more than double the speed limit and derailed, dramatically, right in front of a camera.

At the time of this writing, the exact cause is unclear. It looks like it was simply that the conductor, receiving a phone call from a local stationmaster, forgot to apply the brake. Anyway, 80 people died.

The government, enthusiastic about finally having a national tragedy to compete with their own corruption scandals, copied and pasted a press release from another disaster: Prime Minister Mariano Rajoy and his government are deeply saddened by this terrible news, and extend our sincere condolences to the people of Gansu, China.

And life goes on as it always has…

(For those of us who are still here, anyway.)

One thing I have to say about Spanish train travel: it’s a luxury compared to Italian train travel. In Italy, even third class citizens have an unemployed cousin with a car and lots of free time to drive them around.

If you find yourself on a train in Italy, you can nestle up against the fat, sweaty gentleman next to you in your cosy, pre-war standing-room-only carriage, secure in the knowledge that you’re a legitimate fourth-class citizen of La Repubblica.

In Spain, however, the third and fourth classes just stay home in summer, not wanting to travel to other cities.

In Spain, if you’re travelling by train, congratulations: you’ve made it all the way up the social ladder to Second Class Citizen, or, more accurately, Second Class Subject of His Serene Majesty Juan Carlos I.

An hour into our trip, there’s a stop and the train changes direction. Our seats are now facing forward and we can see the rugged Castilian terrain. Trees chopped down centuries ago, leaving arid grassland dotted with farmhouses and enormous windmills.

Not the Quixotic kind – the modern wind-power kind. 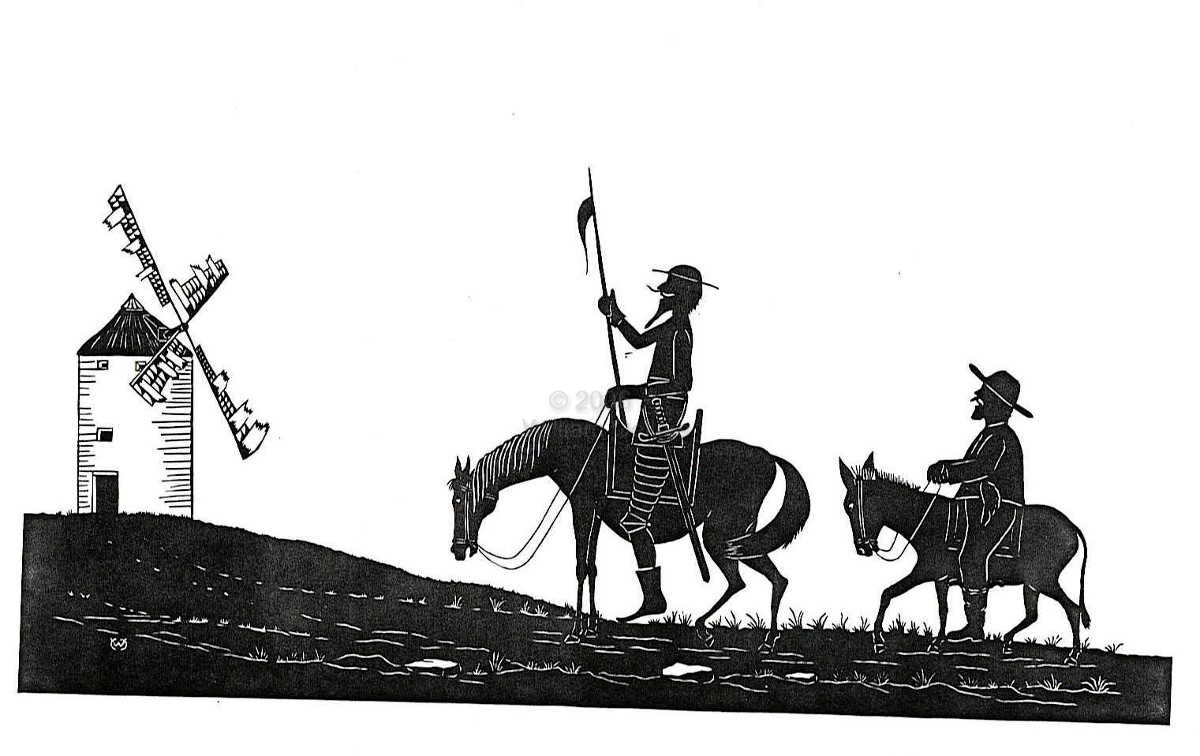 I’d be happy to credit someone here, but have no idea who the artist is… Anybody know?

My trusty travelling companion Lucy runs into a woman she knows, who’s sitting a few rows ahead of us. The woman comes back and explains she’s going to a weeklong Tai Chi workshop somewhere up north. “It’s going to be great!” she smiles. “No husband, no kids!” Apparently, the obese gentleman at her side is her lover, or a fellow Tai Chi practitioner.

Lucy, anglophile extraordinaire, goes back to reading a copy of To Kill a Mockingbird that’s swollen on one corner after being dipped in a relaxing cup of café con leche.

Strictly speaking, anglophile isn’t the right word, but apparently there is no word for a fan of American culture – and I’ll be goddamned if I’m going to start using yankophile.

She occasionally leans over and asks me for the meaning of a pencil-underlined expression. “Darling, would you be so kind as to explain the meaning of I seen yonder [African American] ruttin’ on my Mayella.”

I explain the animal connotations of the verb rut and the deep southernness of yonder [African American].

“Darling, what does it mean: to go frog sticking without a light?”

I explain that basically, I have no idea.

I hand her a ham sandwich. Now that we’re second class citizens, we can afford better ham in larger quantities.

The train slows from 240 km/h to 100 km/h. Normal highway speed. The landscape slowly gets greener. We go through Zamora and after that it’s mostly scrub forest all the way to Ourense, where we turn south to the Portuguese border to follow the Rio Miño towards the sea, this time through real forest.

It’s beautiful and empty and green.

We’ll be getting off before the train goes through the  curve that derailed the train last week, but still, it’s difficult not to think about the accident.

I had already bought the ticket when the news broke, and figured that after what had happened, they’d probably be much more careful.

After everyone finishes blaming everyone else in the investigation, they’ll surely enact new safety procedures.

In any case, this beach holiday might cost us our lives… Let’s hope it’s worth it.

P.S. For more Spanish travel, check out Cuenca, Ávila, and Gran Canaria. Or for something more international, try Digital Nomad Adventures in London.

P.P.S. Okay, here’s some more, if you’re so inclined. I’ve got a lot of articles written at this point. So how about the big debate about whether or not tourism is ruining Spain. It’s totally worth your time, I promise. And if you’ve got a literary bent like me, you should check out how to be a serious travel writer. Have fun!