A friend of mine has an enormous collection of English textbooks and phrasebooks at home, and when I flip through them, I’m struck with how perfectly useless most of them are for someone who wants to actually speak English. Not to mention how expensive.

One of them is called El Inglés de la Calle and is full of sentences like “May I kindly remind the audience that smoking is not permitted in the auditorium” and “I wouldn’t be so bold as to claim that he is guilty.”

Sentences, in other words, which make me wonder if the author has ever set foot on a single street in any English-speaking country. For some real Street English, check out Urban Dictionary, or listen to  Jay Z and Kanye West. 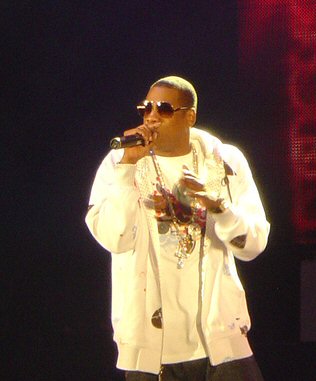 The rapper Jay-Z speaks some world class Street English. Photo by I Am Guilty.

Of course, El Inglés de la Calle is perhaps just a catchy title which will sell more books than a more accurate description.

Titles like “1001 Sentences that Most English-Speaking People Would Never Be Caught Dead Saying” or “How to Bore Someone to Tears–In English!” don’t have quite the same ring to them.

Since I’ve already written a couple of wildly popular articles about how to attract members of the opposite sex, I figured I might as well make my little contribution to world of Street English by providing a few useful sentences for the young international Don Juans and Cassanovas among us.

On an unrelated historical side note, Don Juan was a fictional character originally created by Tirso de Molina… Yes, the one with the Plaza named after him. He’s appeared over and over again in various literary works, tending to be dragged down to hell at the end of the story.

Cassanova was an 18th century Italian adventurer. Read his autobiography, it’s brilliant! In the end (when he’s worn out his welcome in all the other countries in Europe) he ends up in Madrid and his description of Spanish life is great. He was locked up by the Inquisition, seduced a shoemaker’s daughter, and hung out right down the street from my favorite restaurant, Casa Toni.

And so without further ado:

My friend was in New York, and he said that American girls smell like hamburgers. Do you mind if I smell you? = Un amigo mío estaba en Nueva York y me dijo que las americanas huelen a hamburguesas. Te importa que te olfatee?

I promise that your boyfriend back in Kansas will never find out about what happens between us. = Te prometo que tu novio ahí en Kansas nunca descubrirá lo que pasa entre nosotros.

My parents are out of town for the weekend. Do you want to come over? = Mis padres están de viaje este finde. Quieres pasar por mi casa?

Wow, I really like your flip-flops. Do you always dress this way when you go to church? = Vaya! Me gustan mucho tus chanclas. Siempre te vistes así para ir a misa?

Here in Spain, first we make love, and then we decide if it was a good idea or not! = Aquí en España, primero hacemos el amor y luego decidimos si era una buena idea o no.

Actually, that last one isn’t true. And I’m technically still a virgin, so don’t take my advice too seriously.

Incidentally, those articles about how to seduce American women are among the most popular posts on this blog… Yes, como ligar con guiris is something that young Spanish men are searching for in Google!

Well, who am I to say? I love exotic women, and I suppose that if you’re not American, someone from Oklahoma City is pretty damn exotic!

If you’re looking for more serious information about bilingual romance, I highly recommend the book Inglés Para Pervertidos by Venus O’Hara. It gives you all kinds of useful sentences you can use in a moment of passion… It’s the English method we’ve all been waiting for!

The talented Miss O’Hara is an English teacher–like me–and an explosively sexy redhead–like me. She also writes a blog in El Pais and (strangely) never seems to wear the same underwear twice.

Enjoy the HOT Spanish summer… Love is in the air!