What do the Spanish think about foreign people?

I don’t know how it happens…

But sometimes (well, maybe often would be a better word) Spanish people read what I’ve written here on this blog and get pissed off.

They say I’m generalizing about Spanish people and their culture, and that I obviously have no idea what I’m talking about.

Of course, it’s true. I am generalizing.

Not everybody over here is dishonest, or badly dressed, or a prostitute, and it wasn’t my intention to paint them that way.

However, it’s impossible to write about a nation of 46 million people without doing a lot of generalizing, so that’s exactly what I do.

It’s my blog, and of course, it’s my opinion! If your opinions are better than mine, you’re welcome to start your own blog.

(And when you’re ready to monetize, check out this article for tips.)

Not to generalize, but all Spanish people get around by donkey.

However, I recognize that my opinions here are quite one-sided. I sometimes say unpleasant things about Spanish people, and I should give them some way to respond.

So one of my best students has offered, in the interest of bilateral communication between nations, to write a bit about what she thinks of foreign people in Spain.

What do the Spanish think about foreign people?

With no further ado, I introduce you to Nuria. I’ve edited a little bit of what she wrote for clarity, but tried to leave some “local flavor” in the writing.

Generally, I agree with her. But of course, it is my blog, so I’ve responded to what Nuria says in parenthesis.

Anyway, what do the Spanish think about foreign people living in their country?

Here’s Nuria to explain it all…

Since I came to Madrid seven years ago, I have met a lot of people from different nationalities. But recently, I’ve had the chance to get to know foreign people better. It’s very gratifying for me because I learn much of other cultures every day. Today, I have to admit that some of them are my friends now.

Soon, I discovered their opinions about my country, Spanish people, our culture and our customs.

When a foreigner comes to our country, the first thing he discovers is the food. They love the ham, the paella, and the olive oil, of course. Oh! yes. I completely agree with them. We have the best food.

(Yeah, Spanish food is awesome! Check out my article about the Top 10 Spanish Foods, for more about that.)

But also, they think Spaniards are a little bit unkind. Why? Only because we never say “please.” Is this really important?

(For many people, yes, it is! When I arrived in Madrid, I felt terrible for a couple of weeks because I thought everybody hated foreigners. Then I realized that the locals were treating everybody the same way: not very courteously. Nothing personal, just that people in Madrid don’t spend much time being unnecessarily polite… Now, when I go to other parts of Spain, I’m shocked that people are so nice to me. I think it’s just that “niceness” is a cultural convention rather than a universal quality.)

Some foreign people have been here for a few years, and suddenly they consider themselves experts on Spanish politics. They think they can start speaking about ETA or about the independence of Catalonia… All of Spain’s deepest problems. It’s very insensitive!

(I used to try to stay the hell away from these conversations, but now I write a bit about Catalonia. Anyway, if Spanish people have been trying to solve them for centuries with no success, I’m certainly not going to come up with a brilliant solution myself. And I hate it when foreign people tell me how the USA could magically solve all its problems. So I understand what you mean.)

One argument people have every day is about the Spanish healthcare system. How can anybody speak badly of our health system? Well, maybe they should go back to their countries to have better medical attention.

(I am a big fan and defender of the Spanish healthcare system… I think it legitimately is one of the best in the world, and everybody has the right to use it. Anybody who complains about the Spanish healthcare system probably just likes complaining. Don’t listen. Spain has the highest life expectancy in Europe, and people here also live longer than people in Australia, the USA, Norway and Canada.)

It’s true that over the years our health system has deteriorated, but Spain is now in a huge economic crisis with more than six million unemployed people and the health system costs millions and millions of euros and it’s the biggest sacrifice this country has to make.

(Very true. It’s a small miracle that Spanish society hasn’t just collapsed, with all the problems we have here. 27% unemployment, for example. And the government has done a remarkably good job so far at preserving both the health system and pensions… Spanish people living so long means they’re also getting a pension for 20 or 30 years, in many cases. We’ll see how long our social system lasts, it’s under a lot of pressure right now.)

(Update, Feb 2019: this was a few years ago, and the economy is better now. Still, demographics aren’t good and the pension system is still having problems with funds.) 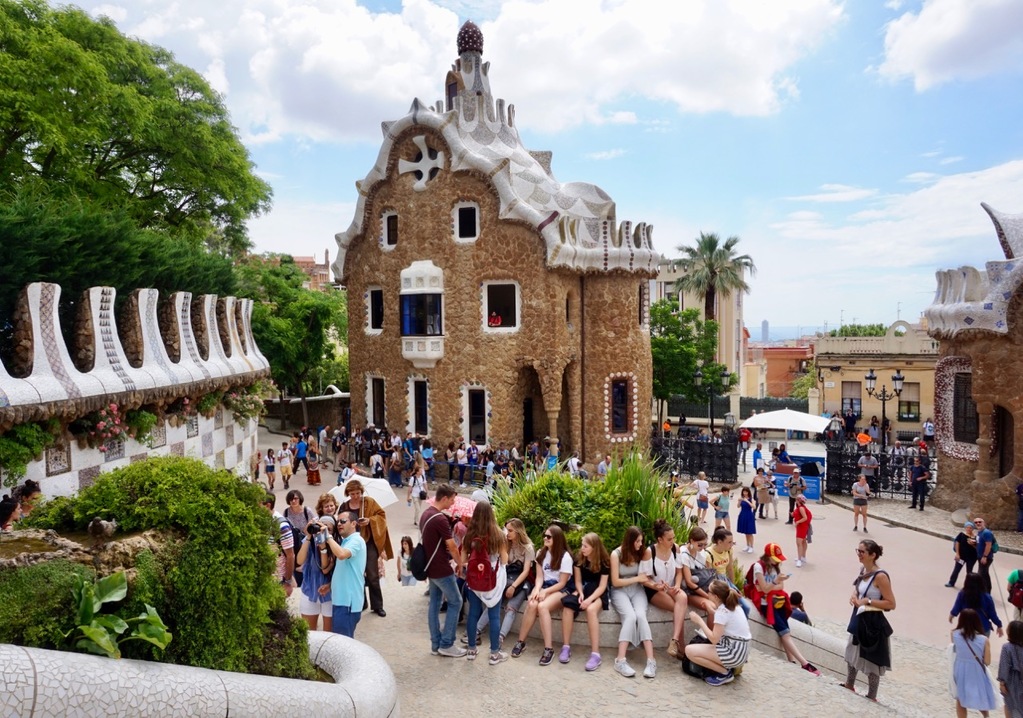 Parc Güell in Barcelona… fun for non-Spanish people of all sizes!

Americans and their sense of entitlement

Another kind of foreigner moves to Spain thinking that their life here will be easier than other foreigners because their country is more developed than ours.

Americans, for example, think that they are the “kings of the world” and they say things like “How can they do this to me?” or “I am an American citizen!” Perhaps they are, but it’s a very arrogant attitude.

(Nuria, for a little bit of background, works with a government ministry that deals with a lot of foreign people. I’m somewhat shocked that anybody is ridiculous enough to start shouting “But I’m American!” when things don’t work out for them. But I guess it does make some sense: we Americans all like to think we’re special. In any case, let me assure you: If the only thing you  have to justify yourself is “I’m an American citizen!” then you’re definitely not special. You’re just another ignorant asshole, one of 312 million!)

My English teacher (That’s me!) publishes in his blog things like “Spanish people dress like a circus in summer!” Someone should tell my English teacher that everybody knows that Americans are the worst-dressed in the world during all the year!

(Maybe we’re not the worst-dressed, but I do generally agree. At least let’s say we’re in competition with the English for worst-dressed. Let the record show that when I wrote Summer is Coming to Madrid, the circus-like environment was among the positive things. I could have easily added something negative along the lines of: Soon, Madrid will be full of fat, badly-dressed American tourists who will shuffle around shouting in their shrill nasal voices “OH MY GOD I CAN’T BELIEVE WE, LIKE, HAVE TO WALK, LIKE, TWO WHOLE BLOCKS FROM THE HOTEL TO STARBUCKS!  I JUST WANT MY FRAPUCCINO NOW!”)

Once he wrote: “the European girls first make love and then they decide if it was a good idea or not.” I would like to ask him, how many Spanish girls made love to you and then decided whether or not it was a good idea? Maybe a lot? I don’t think so…

(Ouch! I was quoting from the Simpsons, to be fair. See point #2 in the article Teaching English in Spain is So Glamorous for the context. In reality, I try to avoid any serious discussion of “who is ‘more liberal,’ Spanish girls or American girls?” because my statistical samples are much too small – ahem! – to say that I’ve done any sort of scientific study. In any case, what I’ve said about Puritan culture making people feel bad if they try to enjoy their lives (here, for example) is very very true. Some people will say, “What about in New York?” To which I respond: “Bah! Nobody’s from New York!”)

Finally, I guess it’s easier to see the worst of a country than to recognize all the good it has. Being grateful is a virtue.

(Yes it is! And believe me, I am grateful for many things about your beautiful country. Many times when I wake up in the morning I’m still somewhat surprised to find myself here in Madrid, and I consider myself to be very lucky to live in such a wonderful place and to have the life I have here.)

Anyway, I envy foreign people’s love of their respective countries. I love Spain, too, but most Spanish people never say: I love my country.

Maybe in the future, we will…

(I love Spain, too! And thanks a lot for writing, Nuria!)

In conclusion, or something similar…

Well, that’s that! One Spaniard’s opinion of foreign people in their country. I guess I should write a few more articles about why Spain is great. Just for some balance.

For some things I’ve learned about the USA while living here, check out this article. Or if you really want to have some fun, try Are Europeans more civilized than Americans?

Loving Spanishness – in all of its facets and manifestations.

P.S. Spaniards, what do you think about foreigners in your country? Leave a message in the comments!

P.P.S. I’ve got some more generalizations around here if you want. Check out my instant classic article about dating Spanish girls, for example.