It’s spring in Casa de Campo – Madrid’s most natural park. And the good news is that the whole park is basically right in the middle of the city.

You can get there on foot (crossing the Manzanares river from Principe Pío), or you can get off the metro in one of the stops on the edge of the park: Lago, Batán or Casa de Campo. It’s famous among legitimate madrileños (who don’t often leave their neighborhoods and many times know virtually nothing about their own city) as a place where prostitution and other vices run rampant.

If you’re looking for that, most of it is on the Principe Pío side. However, the whole of Casa de Campo is 5 times the size of Central Park in New York!

Most of it is an oak forest, and in some parts there are a lot of Stone Pines also. As shown in the above photo, Stone Pines have long trunks with no branches, and large flat crowns, so you can walk between them with no problem.

Historical note: Spain used to be full of trees, but thousands of years of civilization haven’t been kind to our forests—as you can see if you visit anywhere in the La Mancha region to the south or east of Madrid. 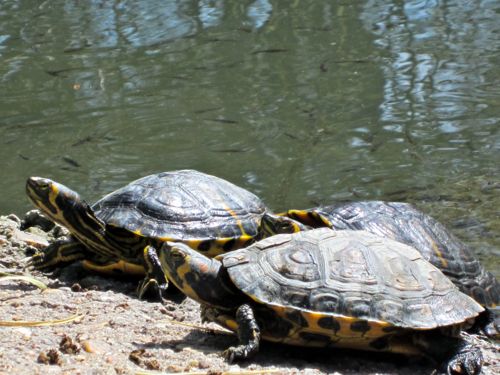 There’s a little creek running along the south side, with a bit of fauna. Here are some turtles, but we also saw squirrels, storks, ducks and geese.

Historically, Casa de Campo was a royal hunting-ground. With the declaration of the Second Republic in 1931, it was turned over to the people of Madrid. Now we have a monarchy over here again (it’s a very very long story…) but the park is still public.

The best thing about this time of the year: almond blossoms! And not much more to say. Perhaps you’d enjoy some other articles, like 5 reasons why living in Madrid is awesome.